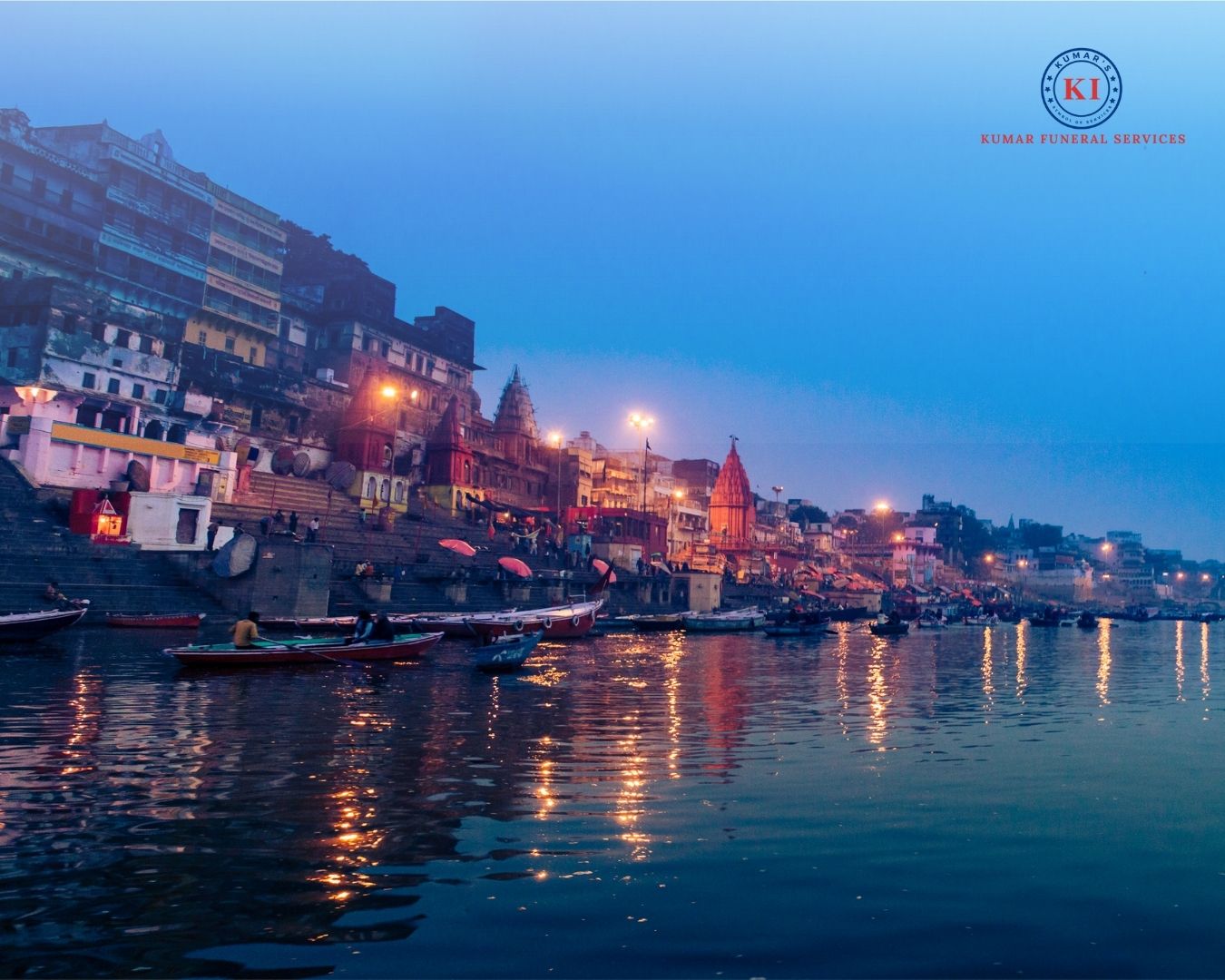 Kumar Funeral Service Provide End-To-End Cremation Service In Varanasi. Our compassionate staff will take care of everything for you, including the hearse van, freezer boxes, shraadh priests, and cremation services.

The Raja Harishchandra ghat in Varanasi, One of the holiest places for cremation in India. During the first wave of covid which hit India in early 2020.

Numerous Hindus travel hundreds of kilometers to this holy city to have their ashes burned on the Ganges River’s banks.

VARANASI, A MAZE-LIKE CITY ON THE RIVER GANGES, is among the world’s largest oldest surviving cities and the holiest of Hinduism’s seven sacred cities. It is believed that if one is cremated in Varanasi and their ashes are released into the sacred and purifying the Ganges, their reincarnation cycle will end and they will achieve Nirvana.

The presence of death is unavoidable for those who live in or visit Varanasi. It is, indeed, the city’s main source of income. Every day, around 100 bodies are cremated on wooden pyres along the river’s edge at Manikarnika Ghat, the largest and most auspicious cremation ghat. Every day, the ghat (steps leading down to the holy water) is open.

Every day of the year, around the clock. The eternal flame that feeds the fires has been said to be burning for centuries.

There are 87 ghats (literally, steps leading to a holy body of water) connected along the Ganges in Varanasi, but only a few are official Varanasi burning ghats.

The rest are temples, laundromats, and hotels. I’m not going to lie: walking along the ghats in Varanasi is, to put it mildly, an out-of-this-world experience.

You won’t believe what you’ll see, the smells that will enter your nose, and the people who will meet or follow you. When you factor in the humidity, it’s a tough pill to swallow.

So I assumed I’d write this post to prepare you for what you’ll see, as well as to provide safety advice and common courtesy to avoid offending anyone.

Here’s a look at what it’s like to visit the Varanasi cremation ghats.

If you’re hesitant to continue reading, know that there are no pictures of bodies in this post.

A ‘Ghat,’ in its most basic form, is a series of steps leading down to a river.

These are common in India and are usually attached to sacred temples.

Although it is widely assumed that the Ganges River is the embodiment of the Goddess Ganga. Lord Shiva created Varanasi, which is why people believe it is so sacred.

In Hindu mythology, there are numerous legends about why Varanasi is so sacred. A popular one, however, is a battle between Lord Brahma and Shiva.

Ghats are used on a daily basis in India. People use this to bathe, wash their clothes, perform aarti (religious ceremonies), and pray.

Varanasi has 87 ghats, or steps that lead down to the holy River Ganges.

Hindus practice reincarnation as part of their religious beliefs. People are born, live, and die multiple times, according to Sanatana Dharma.

The soul’s reincarnation will occur as many times as it takes for the soul to be reunited with its source. The soul will continue to do so until it achieves freedom or ‘Mukti.’

Hindus believe that the body serves as a prison for the soul, which is completely pure.

Hindus believe that when the body dies, the soul is temporarily released from its earthly residence. It will, however, be transferred to a new body very soon.

As a result, cremation is used in Hindu funerals to cut the link between the body and the soul. They believe that cremating bodies allows the soul to progress to Mukti.

They hope that doing so will liberate the soul and propel it closer to Mukti and Nirvana.

Fire is chosen as a purifying element to aid in the release of the soul and the washing away of sins. Every day, around 100 bodies are cremated at the Ganges River’s edge in Varanasi.

While viewing the cremations is allowed, photography is strictly prohibited, and if you attempt it, don’t be surprised if you are aggressively stopped. Photos are thought to obstruct the soul’s entry into Nirvana.